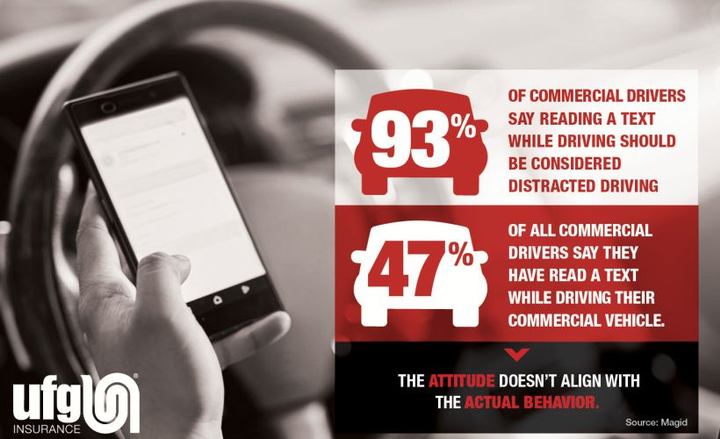 More than 90% of commercial drivers believe that reading a text while behind the wheel of their company vehicle is considered distracted driving, yet nearly half of those drivers say they have done it.

The data comes from UFG Insurance who recently expanded its distracted driving awareness campaign, including content specifically about and targeted to commercial fleets.

UFG’s “Worth It” program, which launched in 2017, has set a mission to provide companies with resources to spread the message that distracted driving is dangerous and needs to be stopped.

The content that covers commercial fleets — including posters and presentations — is drawn from proprietary research conducted by UFG and points to some disturbing trends among commercial drivers.

Key among the findings is that 72% of commercial drivers surveyed acknowledged that their distracted driving could cause a collision.

Four in 10 (39%) said they have sent text messages while operating their vehicle, and 47% said they’ve read a text. Calls are another problems. Six in ten have talked on a handheld phone while driving.

Moreover, nine in ten fleet drivers say they have engaged in other forms of distracted behaviors including talking to a passenger, listening to music, changing the station on the radio, or adjusting remote controls while driving.

On the upside, the UFG survey found that commercial drivers are four times more likely than general drivers to use an app designed to prevent distracted driving.